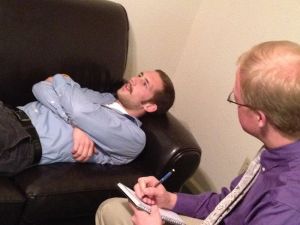 In the modern era, therapy has become an everyday part of life. In America especially, to inform someone that you go to therapy is no different to stating that you take part in a Pilates class. It is accepted, encouraged and considered the norm to spill out every thought you have to a professional stranger and rely on them to sort out all the big and small problems of life. What’s worse is that these so-called professionals charge a huge amount of money for their services. They act as the ‘parents’ of society. One hundred years ago, if someone had problems they would go to their mother or father and ask for sensible advice. Today, we pay for the advice which we often need because of our mother and father. What has caused this dramatic reversal of a time-honoured practice of relying on our parents? Is it their fault? Have they failed (or been failed themselves) to raise us properly with sensible guidance? Are we just emotionally and mentally weaker than we once were? The stiff upper lip is no longer encouraged, but looked down upon. Bravery isn’t something to be proud of anymore; men should cry, people should show their feelings, wear their hearts on their sleeves and prefer the advice of a stranger over natural instinct and common sense. Perhaps the death of chivalry is to blame? Or feminism? A man is no longer considered the dominant person within the household, he is no longer the provider, a woman can be both those things – and that is, of course, a good thing. But has it had unseen repercussions? An emasculated society where men feel like they have lost their pride and position. Of course, that may seem ridiculous but research has shown, according to the Telegraph, that even in Britain, where therapy is not nearly as popular as in America, men do feel that in the space of a couple of generations they have lost their role in society “fuelling feelings of depression and being undervalued”. The result of this, is that those who used to give the advice, now feel like they themselves need it.

This is, however, only one of several reasons as to why therapy has become so popular. It is perhaps inevitable that as society becomes more developed with racial freedom, equality of sex and media (from which very little can stay hidden), that there might be some necessary repercussions. There are many who will tell you that therapy is essential to help you realise what is important and how to deal with your problems. I cannot help but feel that this is truly misguided. Family and friends are just as qualified to give good advice despite not having a few professional letters after their name. They know you intimately and they know your problems. Likewise, sometimes we have to be able to look to ourselves to know what the right thing to do is. Often in therapy, the answer is there all along and all the therapist does is help you find it (for a large fee). Why not sit down and attempt to work out your own problems by thinking rationally instead of paying someone to help you do the exact same thing?

We should rely more upon our families for therapeutic support.

I am, of course, talking about the smaller and more fixable problems of life. There are certainly things for which therapy is invaluable. Soldiers who have come back from war, marriage counselling, deep depression and children who have suffered traumatic experiences are just a few of the things which in most cases could massively benefit from the right professional help (although once again, family and friends probably have as much power to help these people as a therapist). Mental disease as well can often be greatly helped by therapists and psychiatrists and I would not, for one second, undervalue the benefits that therapy has for these people. It is the smaller issues for which it is now commonplace to seek professional help that worries me. Today’s society blames all its problems on everyone except themselves. We are reliant on our governments and institutions to provide for us because we have forgotten how to provide for ourselves. In the same way, we have forgotten how to look after ourselves, take our own advice, weigh up various options and make a decision without using the help of a paid professional. 150 million dollars is spent every day in US military operations worldwide and this receives a magnitude of criticism but well over ten times that amount is spent every day on therapy. Furthermore, psychoanalysis is not regulated. Unlike physical doctoring where the professional needs qualifications and can be held accountable if something goes wrong, therapy only requires the person to state themselves a counsellor with a wooden plaque on their door. The conversation between two people cannot be regulated, and there are presumably many cases where therapy is of no use to the client but continues on the basis that the so called ‘professional’ wishes to continue to be paid. This not only reflects badly on the true professionals who work tirelessly to save lives and minds but deceives people into thinking they need something they do not. No-one would pay for a heart operation because they had indigestion, but the equivalent is commonplace in the world of psychoanalysis.

There is no doubt that therapy feels good – it is designed to make us feel better about ourselves and reach a level of harmony within our lives. But at what cost? Must society rely on the advice of one sector in the medical industry? Should we abandon common sense and the courage to see through our own convictions and replace them with a sheep-like nation in which we all adhere to the instructions of those we consider more qualified than ourselves? In the vast majority of cases, the answer must be no. We must learn to deal with mental issues ourselves as people did in previous centuries. We must learn to trust in our friends and family and take in the advice of those who matter, not those who are more interested in our money. Therapy has an important role for many people, but at the moment it is too all-consuming, too prominent and as a result, dangerous to a free-thinking and developing world.