I was bored and had very little money in my pocket. I’d spent as much time as I could cleaning and something had to give. After checking my pockets, purse, and contents of all my bags, I managed to “scrounge” together £8.44, enough for coffee and parking and so took myself off to the shopping mall. It was one of those occasions when the shops were filled with all sorts of lovely’s that I couldn’t buy and I knew had I had money, they simply wouldn’t be there!! So I decided it was time for my fave coffee in my fav ecoffee shop.

It was at this very moment that my bladder decided it couldn’t wait and I had to visit the toilet straight away! After having kids, I no longer had the muscle power to hold it, although I had done pelvic exercises for months after. “oh my, I’d better go” literary but I knew I didn’t have that long and instead of heading off to the public loos, decided in my ultimate wisdom that I could make it to the coffee shop and then grab a drink, killing two birds with one stone.

Big mistake as my body didn’t always listen to my brain. In fact it had its own mind and own agenda and was ready right now! I clenched and held as much as I could but it was no good and so I had to assume the duck walk! You know what I mean ladies, bum stuck out whilst leaning forward and legs held tightly together at the top, whilst the lower part off my legs moved as fast as possible. I began to panic! What if I didn’t make it? What if I’d left it too late? I was wearing a dress and so didn’t even have the benefit of jeans to soak up any falling liquid.

My whole face broke out into a sweat and I could feel it going red. I clenched my teeth as I waited for the lift to come down from car park level 4 can you believe, but it was no good I had to lean against something. I went towards the sports shop and pressed my bum up against the wall whilst jiggling at the same time. I didn’t really care at this point that I was getting some funny looks. I’m sure all the women walking past must of had a similar experience at some point, and wasn’t too sure how the men looking dealt with it, so wasn’t bothered with them. Suddenly the lift arrived and the door opened, I made a mad dash for it and assumed the same pose, looked down and prayed. 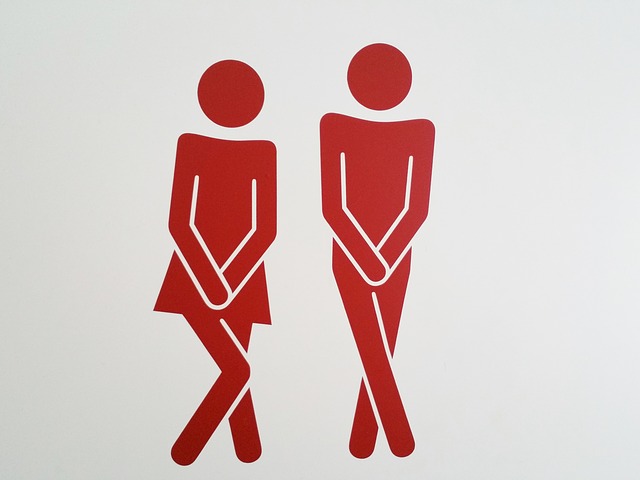 Finally I was on the ground floor and slightly closer to my aim, but I have to admit had weed myself a little bit by this point. It’s always the way that the power to go becomes a bit more over whelming the closer you get. I think you must have a little version of yourself, but a naughty type inside saying “go on belly it’s her own fault, the fool, just let it go”. The nearer I got the worst the feeling got and the more effort it took to hold it together. People were looking, well starring to be honest, but nothing else mattered but the toilet door that was now clearly visible. I made a mad dash for it, ignoring the fact that it was in the coffee shop instead of down the hallway a bit. I’d made it and slammed the door shut whilst pulling up the handle to lock the door at the same time.

I tore of two long pieces of toilet roll to put on the seat, after all I didn’t want to sit on other peoples dirty bum marks, especially those ones that occurred right at the back of the seat (what was that all about, why sit so far back?) and sat down. It was like turning on the kitchen tap full blast and my eyes watered! I let out a sigh as I looked up just in time to see the door handle fall down and the door begin to open.

It was almost in slow motion and what did I do, rush forward to slam it shut? No I sat there just watching, and then people’s faces began to appear having a good old look at my embarrassment. It was at this point, having only pulled my knickers up as far as my knees that I rose and waddled towards the door to re lock it! Oh what the hell what was that all about? Of course it wasn’t my fault I hadn’t completely locked the dodgy lock. It was the stupid handle lock of course but enough of that I had to decide what to do next”. Should I stay in the toilet in the hope that every face that had peered in at me would remove itself from the coffee shop before I came out? Or should I simply stay in the loo and hide ? I decided to make a run for it and knew it had to be a fast exit.

I straightened myself out, opened the door and off I went like a greyhound running in a race with only the thought of winning on its mind. I didn’t take any notice of anything else apart from the door, not even the table that was clearly in my way and nearly took my hip out just to add to my embarrassment. I made it to the door and outside and then instantly slowed down into a normal “yer everything’s good” walk, phew! at least I’d got away.

And so at this point I should of gone home, but I had the hump that I had caused my own embarrassment and still hadn’t had a coffee. So I took myself off to the local supermarket that had a coffee shop to try again. Finally sitting down with a lovely Latte, I began watching an older lady with the “shakes” eating a piece a sponge with a fork. I was transfixed as she chased a piece around her plate trying to stab it and pop it in her mouth.

Finally she had made it and began to move the fork towards her mouth however the shakes in her hand made it more difficult and she moved her hand towards her mouth, then away, then towards, then away. I felt nervous for her as I watched and it was almost like a countdown, 1 2 3 4 go, suddenly she went for it and the fork shot into her mouth with the speed of light. “oh!” I couldn’t help myself, it just came out and instead, for the second time in one day, all eyes were on me! Well that was it I couldn’t take anymore, I took myself straight up to the counter asked for a takeaway cup, went down stairs, got in my car, and went straight home …….. to clean !!!!