Previously we examined the ‘Pre-Road Movie Road Movies’ of the Thirties to the Fifties. Now we will be looking at the developments that took place once the ‘Road Movie’ had become a commonly accepted genre.

So keep your eyes about you, I’m sure some law enforcement agency is probably trying to track us down by now, as we’re off again.

Set in the 1930s and based around the lives to bank-robbing folk heroes, Bonnie & Clyde; Bonnie Parker, bored of being a waitress in a dump of a small town, joins up with manic and dangerous ex-con, Clyde Barrow, to start robbing banks across the state of Texas. Cue anti-establishment themes and revolutions in how films portrayed sex and violence.

We discover a well- and imaginatively-shot ‘criminals on the run’ piece, which starkly reveals the poverty of 1930s ‘Depression’ America, uses an inventive soundtrack superbly to highlight and contradict the action, has two very interesting and complex anti-heroic leads, all of which culminates to produce a hugely unsettling anti-establishment hard hitting message.

And it’s fun as well.

What does it teach us about the Sixties?

It teaches us that the Sixties really blew the lid on what cinema was about. Brimming with new camera tricks, new soundtrack techniques, scenes of loaded sexuality and explicit violence, and political activism, it really proves that cinema had changed.

Also there’s an underlying cynicism in the movie. The police are shown to be concerned only about maintaining the status quo and boosting their prestige. The lead duo are ‘folk heroes’, but nevertheless they are miscreant, violent, vicious, and generally unstable. It’s almost as though the film is suggesting that the only type of ‘hero’ which could exist in the capitalist culture of America is the ‘anti-hero’. That it’s Bonnie and Cylde’s mental abnormality alone that allows them to strike out against the ingrained norms.

The 60s ushered in a new generation of film makers. The old order was dead.

Bonnie and Clyde made Road Movies into a recognised genre.

While the tropes and themes had existed long prior, it was only with Bonnie and Clyde that the genre crystallised.

The diners and motels and character development that were displayed in the three films of my previous article are all in this one. The new development, however, is how the whole thing is filmed.

Numerous close-up shots of Bonnie and Clyde and bleak wide shots of poverty-stricken regions. Whether it’s the failed farm purchased by the banks, the dust fields caused by the crop failures of the Depression, or the band of travelers – presumably on their way to California – who give what little they have to the film’s anti-heroes, the film is unrelenting in using scenes of the places the characters travel through in order to tell the story of the film.

The location becomes a character in this film.  This is a technique which would become a staple of road movies. 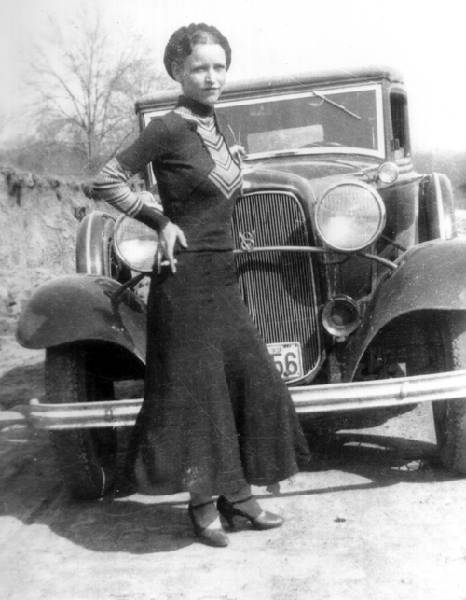 Ellie Jo, a bored bank clerk, joins Candy, an ex-con, who learned how to use explosives when digging up roads in prison. They form a bank robbing duo touring the towns of Texas. They also have sex with a lot of men in very awkward explicit sex scenes performed to backing tracks of terrible Seventies pop songs.

I have to admit, I rather regret my choice of Road Movie for the Seventies. I chose this film because it was one of the only road movies of the time which had two female leads, most road movies having a male and female pair starring.

But just because ‘Women in Prison’ films have a majority percentage cast of women and usually pass the Bechdel Test, that does not means they are particularly progressive. The sheer amount of gratuitous nudity of its leads, and the number of times they have sex, often makes this film feel like a porno. And while it has just enough plot to convince you otherwise, it’s not something you’d sit down with your friends and family to watch. Also the tone feels very schizophrenic; it starts as and continues as dumb comedy for most of the film, before turning to shocking violence and trauma near the end, and then reverting to dumb comedy for the finale.

So not one I’d recommend for wholesome reasons.

What does it teach us about the Seventies?

Exploitation films were hugely popular in the Seventies. The sub-genre, sexploitation, which this movie definitely is, was also a Big Thing. Cheap low budget films like this were designed to appeal to a base instinct, to make back their cost-of-production money and more.

Of course, some exploitation films have become – rightfully – classics. But most were just cheap cash-ins with nothing but boob-and-violence value. Like The Great Texas Dynamite Chase.

The Great Texas Dynamite Chase teaches us that the Road Movie genre, within a decade of it being crystallised, had developed its own set of very staid clichés. The diners, the motels, the hitchhiking, the lead duo being on the road from the law, the America countryside – all were firmly established in the genre and had become somewhat predictable. America’s a great place to set a road movie because it’s so big, and has comparatively little regulation within it, compared to countries like the UK. But every movie in this series thus far has been set in America, and usually shows very similar parts of it.

The film begins with a woman, clearly a drifter, being found dead in a vineyard. Then the film goes back and shows what led to this point, via both traditional narrative and ‘interviews’ with the supporting characters the woman encounters. And it’s set in France and all in French. Evidemment.

Do you enjoy introspective artsy foreign films, or do they bore you to distraction?

Vagabond has a lot to offer as a foreign arts film. Beautiful shots and atmosphere, with an ambiguous protagonist who poses more questions than answers about the world we live in. Imaginatively scripted, with great use of interviews of characters the woman has met to break up the narrative. But, on the other hand, it’s obviously slow paced, and has the common problem of low budget artsy films in that it sometimes screws up the basics. Such as poor sound editing and cuts between different scenes.

Dunno. Up to you.

What does it teach us about the Eighties?

I have to admit, Vagabond is a bit of anomaly. The 80s were really a period of ‘High-Concept’ films. Films you could summarise in one or two sentences and which were designed to make mega bucks at the box-office. The Eighties saw the rise of Steven Spielberg and his ilk. Also the first ‘teen’ movies were coming of age; so where does a film like ‘Vagabond’ fit in?

French-produced films had been emerging and being noticed for decades, so Vagabond hardly came out of nowhere. But Vagabond also did very well at the box office, grossing a good six million American dollars (admittedly most of the revenue coming from France).

What this shows is a developing use of narrative story telling techniques within cinema. The idea of telling the story by using inter-cut mock interviews is really something that was not mainstream prior to the Eighties. As cinema developed through the decades more and more techniques filtered from experimental film into mainstream cinema.

Vagabond is the first movie on my list which was set outside of the US. So it brings a whole new aesthetic to the table. The bleak drizzly vineyards of France are very different to the parched patchy deserts and plains of the US.

We see that Vagabond is a general departure from the typical road movie cliché. There aren’t any diners or motels or convicts on the run in this film. Instead we get a bleak view of homelessness. With empty fields, abandoned half-built houses, inner city shacks, and camping. The main character, when she isn’t squatting in one of the many abandoned local huts she finds, is usually spending the night in a tent.

What Vagabond shows is that the Road Movie genre is certainly more universal than just a crime duo having pancake stacks in the southern states of America. Without all the prior established clichés of road movies, Vagabond is still undeniably a road movie.

Well, I’ve booked a hotel for the night, writing in the register that both of us are Mr. and Mrs. Smith.  Obviously to avoid suspicion. Though, if you are bloke, maybe that doesn’t work – but we’ll roll with it. We’ve got nothing to do but while away the late hours with stories of our lives, which will allow us to get to know each other better and form an emotional bond which will drive the plot.

Well then I’ll just go to sleep. When I wake up, I’ll be writing the last part of this series about Road Movies. The Road Movies of my generation. Going from the Nineties up until the present decade.

Keep a look out. The police always like to do gun-fuelled raids at night.

Be the first to comment on "A Road Trip through Road Movies: Part 2"